Galilean Learning (inspired by the scientist Galileo) is a curriculum of artisan and design learning developed by Soulcraft CLE.  It is founded upon the cultivation of three intersecting spheres: 1) Agency, self-ownership and self-motivation; 2) A “Toolbox,” including physical tools and resources, skills, habits of mind, accumulated knowledge and creative problem-solving;  and 3) an Action-Abstraction cycle of learning, in which hands-on creating constructs, and in turn, is informed by, abstract learning and knowledge.  We see these spheres at play in the model of Galileo himself.

Galileo was a motivated and curious person – awestruck by the universe and not dissuaded in his explorations by the “shoulds” of then-modern society.  He had agency, self-ownership. He was also a “tinkerer,” constructing knowledge through experimentation and using creative problem-solving in a hands-on way that enabled creative advancements in science. He continued to tinker in a hands-on way, even when others of his day gave up on similar curiosities, because the answers weren’t already in a book. His contemporary, Descartes, was also interested the telescope but gave up because the law of refraction had not yet been discovered.  Galileo dove in nevertheless to construct the telescope. But he wasn’t just a tinkerer.  He had spent decades mastering the field of science, with Kepler’s theories operating as nimble tools in his hands. His academic knowledge, utilized in motivated inquiry through hands-on problem-solving, begat discovery and, importantly, new tools for future discovery. His lasting achievements stand as a model for learning, doing, creating and learning again.

When people learn in this way, it centers their motivation for learning internally.  They are empowered as creators and authors of their own development. They are equipped with the toolkit to succeed regardless of environment or task.  They are problem-solvers and solution-designers. Their learning isn’t for a job or academic success, though it is those things too, but rather for their own growth.  The learning is concrete and immediately accessible with their physical creation as a testament. The lessons of their hands-on learning can then be more easily abstracted for application to myriad other domains.  This abstract knowledge then becomes a new tool in their hands for deeper and more complex hands-on future discovery and problem-solving. In this cycle, the scope of learning becomes, as it was for Galileo, the whole universe. 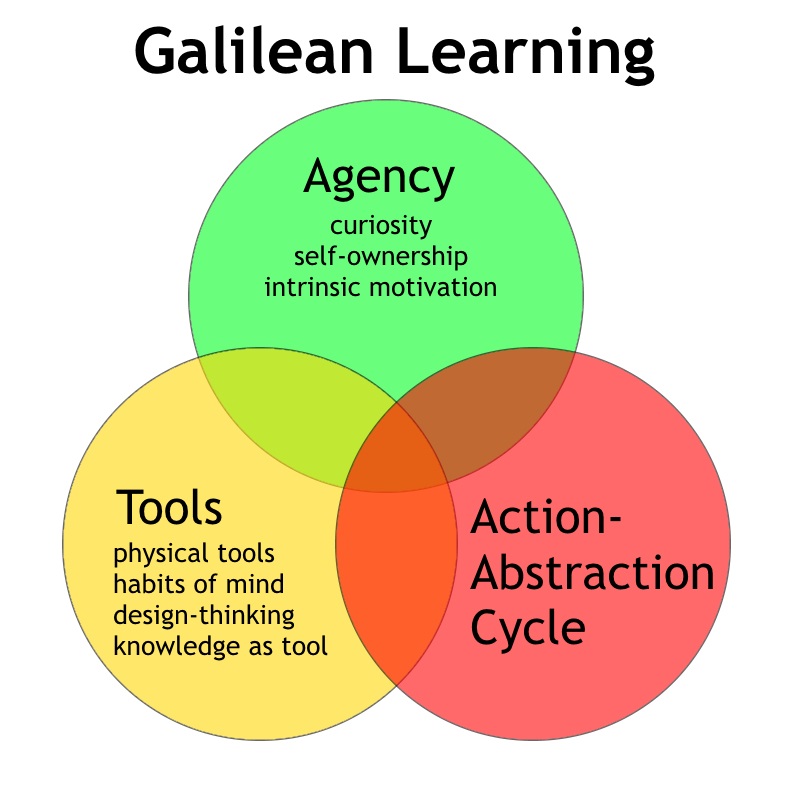